Steelhead Provincial Park is a small park in the town of Savona BC, on the banks of Kamloops Lake, just where it empties into the Thompson River. We stayed at Steelhead for 17 spectacular days. Spectacular for the good times with dear friends, for the views of the lake, for the maintenance of the park by the staff, for the cleanliness of its facilities (hot showers and flush toilets), and for the friendliness of the park staff and the fun we had with them.

Since we were there from the end of May to mid – June, we experienced the lake and the river while they were at their highest levels. Once, twice and some days even more, we walked to the lake’s edge to check the markers we had established (small sticks pushed into the sand) to check the water level. Most of our time there, the water level of the lake went up, often washing away our markers.

We stayed in two different sites. The first site was in an open meadow with lots of trees, chosen because we were able to set up a group camp area with our friends. In addition, it was a bit more sheltered from the winds and fewer people chose to camp there, choosing instead the lakefront and water/electrical sites (of which there were only 8). We ‘dry-camped’ there for 12 days which gave us a good feeling about the capacities of our grey/black tanks as well as the amount of time our batteries would last. 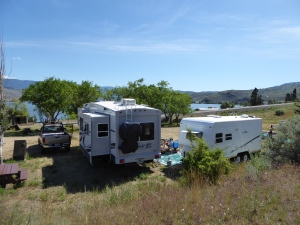 The second site was right where the lake narrowed and curved into/became the river. We stayed at that site, on our own, for the next 6 days, continuing to ‘dry-camp.’ There is no sani-station at this park so at one point we did pack up and drive to Juniper Beach Provincial Park which had a coin-operated ($5) sani-station, to dump both tanks and which was the closest at only 5 miles or so north of where we were.

The current was very strong and the water level was so high that many of the trees normally on the banks were deep in water. This attracted many birds and the odd beaver too. It was here that the almost full-time bird-watching started. We had a spectacular view; no sooner did we get ourselves seated, either inside or out, than a bird would appear. We got to know them and to understand some of their habits.

We also enjoyed a paddle or two with the kayaks but since we were at the end of the lake the wind would funnel down the river canyon from either end, creating strong winds and white caps. I’m a fair weather kayaker and enjoy the peace and calm accompanied by the warmth of the sun that come with that kind of kayaking.

We explored the area west to Walhachin;

and east towards Kamloops to see the amazing but little known Balancing Rock.

The time finally came for us to head south towards Osoyoos and the border crossing at Oroville.