Not that there’s really any day that’s the same, we did start to see a bit of routine develop. But I should go back just a bit…..we did initially try to plan every day, setting an end point for each day but discovered very quickly that most days never went according to “The Plan” we had made. Either the distances were longer or shorter than we were prepared to do each day (every day you feel different both emotionally and physically), the terrain you covered each day varied so much (some days there were many steep ups and downs or you walked a lot on boulders which is hard on the legs and feet), or maybe there were long distances to cover with no cafes or albergues in between so that when you’d get somewhere, all you wanted to do was to eat, drink, and rest; or it was raining and you were wet, or it was hot and dusty and you needed a sangria/cervesa/cervesa y limon, or you found a great ‘pilgrim supply shop’ you simply had to go into and shop….the list goes on.
We were using a great guidebook which had been highly recommended to us, written by John Brierley. (As we walked along, we saw copies of the same book stuffed into numerous N. American pilgrims’ pockets and packs (Brierley must be making a killing since we saw so many and such a variety of editions!) Brierley divided the Camino Frances up into 33 stages; each stage with comprehensive maps, diagrams, lodging, and food. We learned that a sort-of “Brierley’s Brigade” as Michael called it, had developed along ‘The Way’ – many pilgrims who followed the Brierley book stayed at each beginning and end village/town/city at each stage. The distances for each day fell between 18 – 30 km/day. After some experimentation, we decided we wanted to listen to our bodies as to when to stop and to stay at the albergues in places between Brierley’s stages. Oftentimes there were fewer people, smaller albergues, and different choices in ‘Pilgrim Meals’ in these places. We stopped , usually at the first albergue we’d come across since our sore feet, legs & lungs and/or growling stomachs insisted.
So we gave up planning where we would stop to eat, drink, stay each night and learned to live in each moment. (Being a planner, this is something I have strived to do all my adult life.) The moment we awoke started our day. Sometimes if it was quiet or if we still had our ear plugs inserted and our masks still on, we could sleep past 6. If not, we’d get up with everyone else using our flashlights and headlamps (so as to allow sleeping pilgrims to sleep) or when the lights were turned on by some brave soul after 7am. (Sometimes that brave soul was me as I hated packing in the dark, afraid I’d leave some vital piece of equipment or clothing or toiletries behind.) Early on in our walk, when we were still part of ‘Brierley’s Brigade’, we would get up very early if the distance was far so that we could get the ‘required’ kilometres in.
Sometimes our ‘coffee moment’ started before the day’s walk began if the cafe was open early; other times, our ‘coffee moment’ happened along the way after an hour’s walk; sometimes (rarely) even after a 3 hour walk. We preferred to have a coffee and something to eat before we started but sometimes we started with just the water in our camelbaks. Then, finding a cafe that was open and serving breakfast was pure ecstasy. Most often, breakfast consisted of “cafe Americano con una pocita de leche” (coffee with a tiny bit of milk) with a croissant for me and tostada (TOAST –  which turned out most often to be warm slightly singed bread – few places had a toaster and threw the bread briefly on the grill) for Michael. Once I finally learned how to say “scrambled eggs” or “huevos revueltos” in Spanish, we sometimes had eggs for breakfast/brunch. We got so we actually liked to start with just a coffee, walk for an hour or more, and then stop for breakfast/brunch.
‘Rest moments’ happened very spontaneously depending on if:

– you came across an unexpected and interesting coffee place – one playing Spanish guitar music… one on wheels…..; 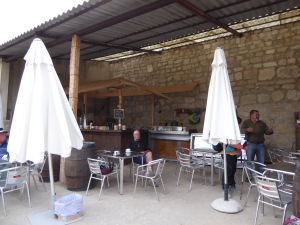 – you came upon a Halloween parade;

– you are from Wyoming and just happened to come across a “Cowboy Bar”;

– you just had to stop and shop on THE WAY; 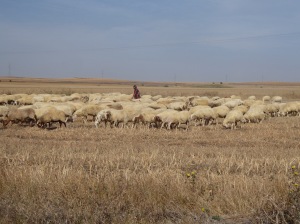 – you wanted to stop at a “landscape altar” (as Brierley so aptly named the many beautiful natural places) that simply called to you to come and spend some moments in silent contemplation; 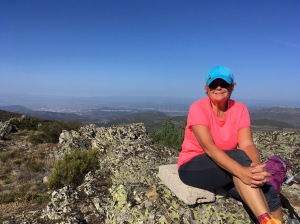 – a church with an open door, music playing, candles lit, invited you to come in;

– you had a ‘hot spot’ needing the application of vaseline, sore feet, socks that had twisted around, or blisters that needed attention;

– you spotted a vineyard with grapes or maybe a fig tree with ripe figs….!

– there was a particularly comfortable looking bench to sit on either in the sun or the shade – whatever the current conditions dictated;

– you found an outfitters shop for pilgrims and HAD to go in; 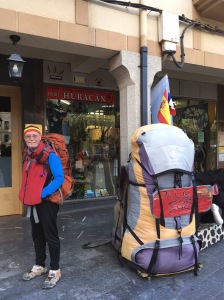 – you had to stop and enjoy the “Cow Concerto”;

​​
‘Rest moments’ happened frequently some days and rarely on others. Sometimes a ‘rest moment’ even turned into a night in an albergue….and that is a whole other story altogether and the subject of another blog.

We also had ‘conversation’ moments and ‘silent moments’. Simply walking, placing one foot in front of the other for hours on end, clears your mind. You stop thinking about all the daily stresses and worries of everyday life. All of a sudden, you find you are having ‘moments’ of a totally different nature. Moments that:

– make you sing songs about the sun as it rises in the sky behind you, warning your legs and the back of your head as it lights up the sky behind you in magnificent colors of orange, fuscia, magenta, and yellow (You Are my Sunshine, Yellow Submarine, Here Comes the Sun….and many more)

– have you asking each other questions of a more spiritual nature and what you believe and why such as the connectedness of everything, the divine, universal energy, God.

Living in the moment and making decisions when they needed to be made, made the walk relaxed and comfortable. We had the luxury of knowing we could stop whenever we wanted, whether it was for photography, to talk, to contemplate, to visit churches, to take the roads less travelled (aka the scenic route), for sickness, and that we’d still have as much time as we needed. We allowed ourselves a lot of extra time – over 60 days – for the entire walk. Brierley suggests that the walk can be done in 35 days but we wanted to take our time. Our average mileage turned out to be around 22 km/day with daily distances ranging from 8 to 30 km/day. We did the whole thing in 38 days including 2 rest days for sickness.