Fatigue, left over from the previous days 19 hours travel, provided the excuse to delay our walk and  stay an extra day at the Hotel TrompeterSchlössle to further explore the Kathedral and city of Konstanz.

Breakfast was ‘delightful’ as Tilly phrased it – muesli, fresh fruit, a bit of ham, cheese and a croissant. AND coffee …

Our mission back to Konstanz had to be delayed for a while. A 0900 Mass was being celebrated. Being a tourist wandering the Kathedral while the congregation was trying to worship would be crass. So I suggested we revisit and photograph a unique water feature/ sculpture/ fountain thingie we had passed by the previous evening, then visit one of the three outdoor sports stores in the area. I didn’t recall why, but it seemed a good way to kill the time until Mass was over.

We got to the fountain BUT last night we had not seen this! 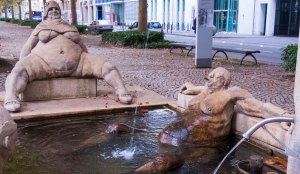 My first comment was “Is that us at the end of our first day?” Tilly and I looked at each other and laughed.

After quickly praying that the pool was not prophetic, it was off to the Magic Mount sports store. Two pair of pants, a quick drying towel, three plastic containers, and a plastic bottle later we left 179 Euro poorer. Each of us had purchased a new pair of hiking pants. Mine were bright blue, Tilly’s were green. Ironically, the pants were Unisex and same size fit both of us. I joked if Tilly was feeling blue on a given day we could switch.

We had  just added extra weight to our packs after spending weeks trying to eliminate unnecessary ounces. I joked that I would need a much larger pack if we continued to shop. 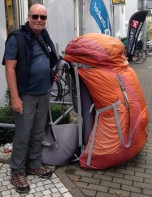 We found it right outside.

Finally we made it. TheKathedral of Konstanz – Basilika Unser Liebe Frau Konstanz – (built in the 10th century) was a significant point for pilgrims to meet. Inside the Kathedral is the Mauritius rotunda (dating from 900 AD) with a replica of the Holy Sepulcher (added in the 13th century). St James (Jakob), one of the twelve apostles stands with seven pilgrim staffs and bags,  scallop shells attached ready for pilgrims beginning the journey. 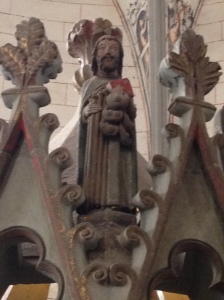 We thought this a good place start. The rotunda however, was filled with loud tourists and their guides (each yelling the explanations of what their respective  groups were seeing).

We returned to the Kathedral and sat for a few minutes considering the significance of what we were beginning. I decided to ask the clerk behind the information counter to stamp our Pilgrim passports (aka Credentials).

ThePilgrim Passport/Credential is the document that “proves” you have actually made the journey. I had all summer long periodically reminded  myself (and then forgot)  to order (after joining) the passports from the Canadian Company of Pilgrims. At T minus 5 days for our trip I remembered! The CCoP website said to allow 3 – 4 weeks for turn around and delivery of credentials … OOPS!  There were other places to get the Credentials … but, the hangup was timing . How to get the credentials before we began walking. I had seen a number of “fast service” reviews  for  The Camino Forum Store (in Santiago) online. I placed an order, gave shipping address in care of the Hotel TrompeterSchlössle, sent off an email to the Hotel asking them to accept delivery for us and hoped. They arrived two days ahead of us.

So, instead of having a Pilgrim Credential from Canada. 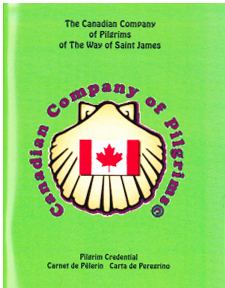 We have Cedencial del Peregrino from Santiago. 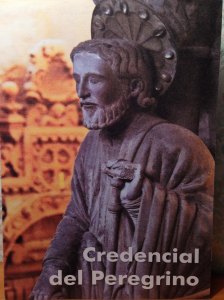 Before I could even ask, the clerk saw the  passports in my hand a said ” Oh, you vish to haf a stamp?”  I said yes; he stamped. 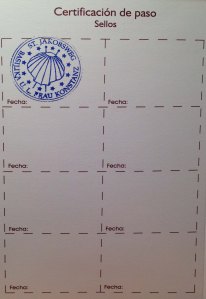 We sat a for  a while longer and I pondered again…what are hoping to achieve walking 2300+ km?…  Why? …We’re NOT hoping for an epiphany or seeking enlightenment… we’re going to trace the historic routes thousands of religious pilgrims have taken over centuries.

Maybe this simple journey about just being … moment to moment.