We began 10 miles up river from Moab UT. 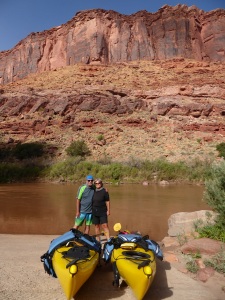 Tilly got her initiation to running rapids at the Big Bend Rapids. 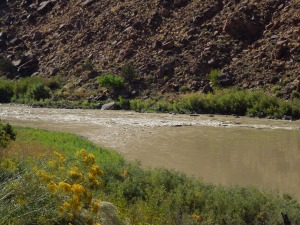 I had not told her there was any kind of rough(er) water on this paddle. 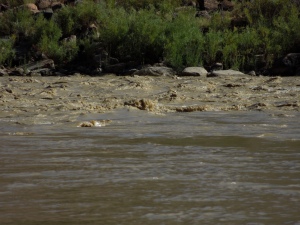 Tilly – “I AM SOAKED… a wave rolled over the cockpit! You didn’t tell me there were RAPIDS on this trip!”

Reply – fearing I might be in a bit of trouble – “What did you think it would be like?”

Reply – hoping to extract myself from blame – “Would you have come IF I had told you?”

Tilly -“Thankfully you didn’t tell me… I didn’t have time to worry or even be scared… that was neat! But I’m soaked”

A few days before we had decided to kayak the Colorado River and made arrangements, with Kathryn at Wild West Adventures in Moab (a most excellent choice, as she turned out to be a wealth of information and assistance), to shuttle ourselves and kayaks 10 miles up river from Moab and then the next day shuttle our truck 10 miles down river from Moab. That way we could leave our truck on the river at our end point(s) each day. Once dropped off, we could proceed at our haste or leisure… again we were unscheduled.

I have to admit, I was a tiny bit apprehensive. It had been at least two decades since I had last floated a river and/or rowed (an inflatable raft) through any type of rapids. Still being a novice kayaker I was unsure of technique for navigating rapids – even small ones. Turns out that much of what I knew about rowing a raft through rapids returned quickly and strategy with a kayak was pretty much the same. I was able to pass along a variety of hints and suggestions to Tilly that helped her navigate the river.

You have to be aware of the currents/eddies when rowing a raft, but vigilant when kayaking. I had forgotten that how powerful the current and eddies can be, so the first time the front of my kayak entered an eddy I was almost tipped over as I spun around my center of gravity. Even so after that first encounter it became a delight to circle back upriver to see Tilly following along. 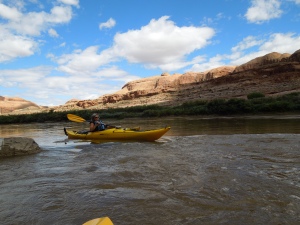 Tilly ran 3-4 more sets of small rapids with hardly a hitch. UNTIL 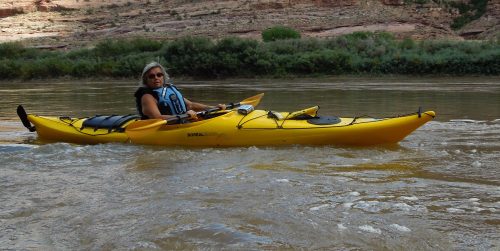 Despite her scare Tilly made it through like a trooper!

Our Day one paddle was spectacular drifting along the canyon walls 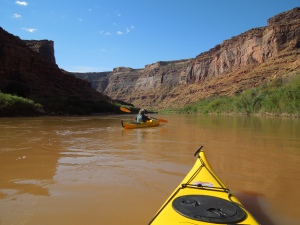 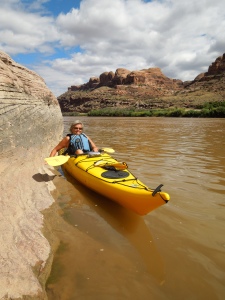 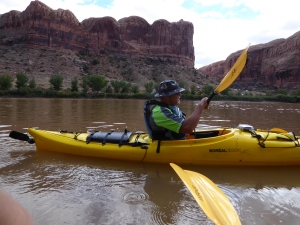 We disturbed a number of Candians (geese) and a duck or two. 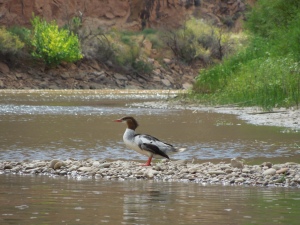 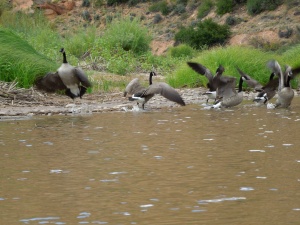 and our day 1 adventure ended as  we pulled out at the boat ramp next to Lions Park in Moab. We looked forward to the next day’s events.

Day 2 paddle began where day 1 left off- the boat ramp on the edge of Moab. Another 10 miles of river to explore. Plus we were going to float through the wetlands preserve. We were hoping to see a variety of wild birds, but our excitement was to come from a very different angle. It was a day for important lessons. It is said -”Good Judgement comes from Experience (lessons learned) AND Experience comes from Bad Judgement”. I need to add “Refresher Experience comes from forgotten lessons.”

The entrance to the channel through the preserve was mostly blocked by a variety of logs, branches and driftwood; making the turn from the main river channel challenging. But I did not think it more challenging than the rapids of the day before. 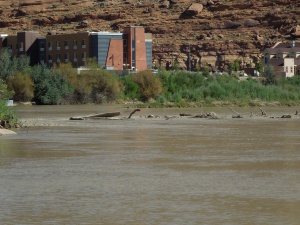 I counted on my athletic ability to push my was through it – and it was challenging. However I did not think about Tilly… critical to steering rapids is setting up your angles. Tilly tried to cut too sharp around a rock and hung up sideways to the current mid kayak AND over she went, dumped out. I watched and as she rolled over I paddled hard to intercept her and her kayak.  She responded perfectly, hanging on to the kayak AND putting her feet down river. Reaching the shore, she lifted the front of the kayak – draining the water from the cockpit and flipped the kayak back upright. She was back in shortly after I rafted up with her kayak. But she was soaking wet. The worst case had happened and she had handled it all magnificently 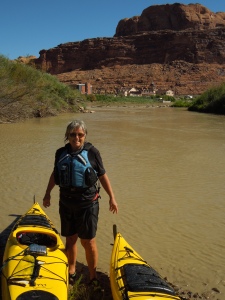 AFTER it was all over, I remembered a (forgotten) basic, most helpful and important hint left out of my variety of hints and suggestions for navigating rapids and river currents.. LEAN INTO the rock NOT away. If Tilly had known she most likely, having leaned into the rock, would have spun backwards around it. But, she did what normal people do – leaned away and the force of the water turned her over. I felt a bit guilty. Lesson 1  learned by Tilly and re-learned by me.

We paddled through the wetlands and back into the main channel of the Colorado. I looked back at a no-longer smiling Tilly. I asked how she was doing and she said, ‘OK, but I’m shivering all over.’ We had wrung out her clothes, but she had not put on anything dry. Once again I had forgotten a BASIC outdoors lesson. Hypothermia can happen even at 50-70 degrees IF there is wind and wet.

Quickly, I spotted a beach and we paddled to it. I dug out my pair of dry pants and wind jacket from my dry bag. Tilly quickly got out of her wet clothes and into her dry fleece shirt, my pants and put the wind coat on. After 30 minutes of soaking up the sunshine Tilly was warmed up enough to continue.  Lesson 2 – specifically: get out of cold wet clothes and into dry ones, say something when you are cold and shivering AND watch your partner closely after a dunking… learned by Tilly and re-learned by me. 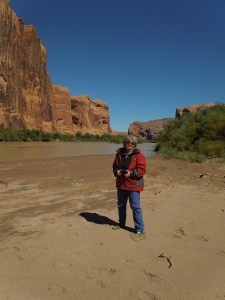 Lunch was served a few miles down the river. After that the wind came up and we paddled a not as much fun as the day before- uneventful slog- final section to our take-out point. We had gotten our taste of river kayaking – the Colorado River, learned (and relearned) some important lessons.

Definitely – We’ll be back!