Our dream was a reality. We had arrived at Nehalem Bay State Park on the Oregon Coast. Our site was great. We were treated with several visits from the locals.

We couldn’t wait to get to the beach for our first views. 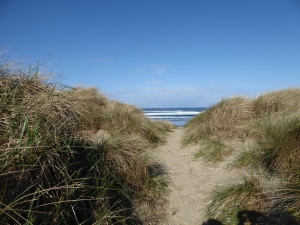 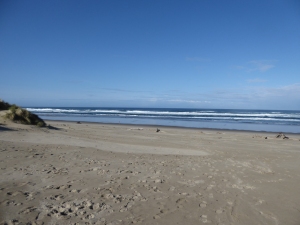 We didn’t walk too far that first day but far enough to see a huge bald eagle just as it took off from its unseen perch on the beach.

On the second day, we tried to cycle into Manzanita but we were too out of shape. After a few very steep ups and downs, with lungs working like bellows and quads feeling like rubber, we returned and took the truck instead. What a lovely quaint little village with lots of cute shops, restaurants, an organic food market and more. 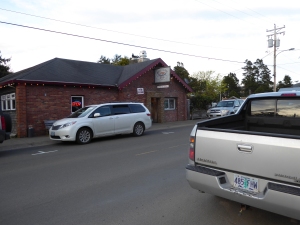 Every day we walked the beach, either north or south, depending upon the direction of the wind. We quickly learned to walk into the wind at the beginning of our walks, giving us the added bonus of the wind at our backs walking back home when we were tired. 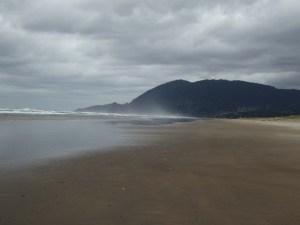 Walking southerly towards the town of Tillamook, the beach ended at a driftwood jetty on top of which sat….our immense bald eagle.

As I sat and rested with my back against a log, Mike went to take pics. When he came back he asked, “Did you see the seals? They’re surfing in the waves!” I looked and did see them playing where the waves were the tallest – where they were cut by the jetty. What a sight! Found some whole sand dollars; all the way there we’d seen lots of broken ones but in this one spot we found some whole ones. We also found several dead “sea creatures” and one live one. Never did discover exactly what it was.

My favorite birds (in addition to eagles and hummers) are the sandpipers. I love the way they scurry about on the sand, forming a line to stay just ahead of incoming waves, then breaking rank again to see what delights the ocean wave has brought them, heads bobbing up and down with tiny bills poking into the sand – just like mini-drills. 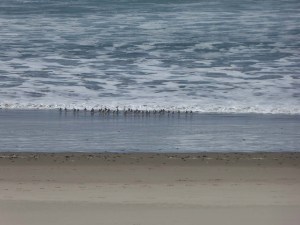 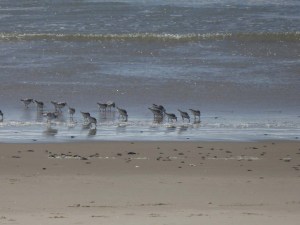 On one day, we woke up to an expected sunny day. Beautiful blue sky. We’d planned to spend the day on the beach here but we both were in the mood to explore. Originally we had tried to reserve at Cape Disappointment up the coast across the Columbia River, in Washington but it was booked for the times we wanted.

Cape Disappointment State Park is indeed beautiful and we enjoyed the time we spent hiking up the trail to the interpretive center and lighthouse followed by a long walk past the North Jetty along the beach. We stopped briefly to bathe in the sun and once again were treated to an even better performance of two seals surfing in the waves. When a wave gets ready to curl and become a breaker, the top third becomes translucent. This time, for just a moment before the wave curled, we saw the clear, unmistakable forms of two seals right there in the centre of the wave, seal shadows in the green translucence. Spectacular! 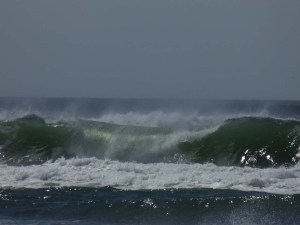 On the way back: we were dive-bombed by some black-headed gulls who didn’t like us invading their space; and we saw a huge big crab, barely alive and wondered why none of the birds had found it yet.

All in all it was a great day topped off by dinner at the Sand Dune Pub in Manzanita.

The final few days there were typical west coast days; days of endless, drumming rain. It was time for us to leave.