The BEST part of the day was kayaking around Lake Cameahwait (also called Bass Lake by the locals), a 55 mile drive on HWY 26/789 from Lander towards Shoshoni. It was hot and sunny – thankfully we had left Lander early in the morning around 715, arriving at the lake by 830. 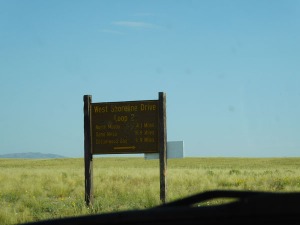 The drive to the lake provided beautiful views of grass covered hills, free-ranging cattle and antelope with mountains forming the background. The road was paved and mostly straight until just before the lake. 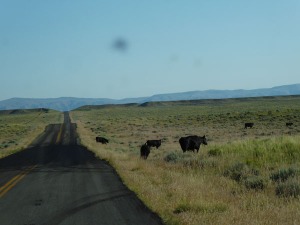 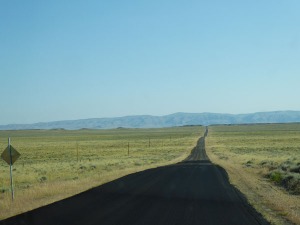 I was out on the lake by 830. I circumnavigated it in a very leisurely manner, pausing often to snap pics of birds, dragonflies, bullrushes, and a white, fragile-looking feather floating in the water which captured my imagination. 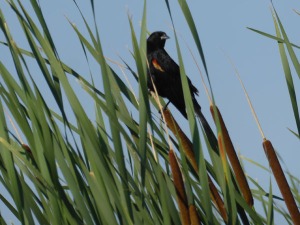 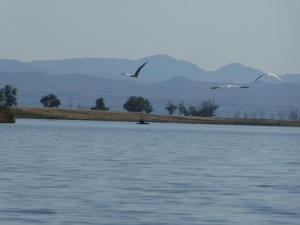 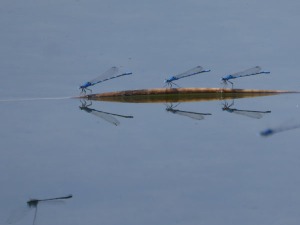 As I paddled, I enjoyed the many views of the lake from the water.

Along the way I was startled several times by a wild thrashing in the water nearby. There are a lot of wide mouth bass in this lake (hence the name Bass Lake) and apparently they sometimes school up to chase prey into the the shallows. When it gets warm they get aggressive, the biologist I was about to meet, informed me….

Arriving back at my starting point, I checked out the time to see if Michael and his Dad might be heading back for lunch. Earlier I had taken off my PFD (to apply sunscreen) and, enjoying the resultant freedom and greater air circulation, stuffed it under the elastic straps criss-crossing the bow of my kayak. I like to have my iPhone, keys and camera with me when I’m out on the water. I keep my camera in a waterproof box velcro-ed onto the surface of the kayak right in front of the cockpit within easy reach. (I have been known to stuff it down my front for faster picture snapping.)

I keep my iPhone in a plastic dry-bag made specifically for that purpose and store it in a pocket in my PFD where I can get to it quickly. I keep my keys in another pocket. Why all the detail about where I keep my “stuff” you are probably asking? Well, as you shall see, the plot thickens.

As I was bobbing peacefully in my kayak, a few meters from where I had originally started, I reached into my PFD to get my iPhone to check the time. It was almost 11 am. As I looked up to search the lake for Mike and Marvin, I saw them a little ways off. Mike gestured towards the shore signifying that it was time for a lunch break. I still had my phone in my hand and it was at that point that I lost full awareness of where my phone was. I’m guessing I stuffed it down my front and am having faint memories of thinking “I must remember it’s there otherwise it might drop out when I stand up.” (That’s happened before with my camera but thankfully, on land-I obviously I didn’t learn my lesson well enough!) I paddled towards the small sandy beach where I had ‘put in’ and ‘beached’ my boat. Clambering out, I saw a man in a red shirt with the Wyoming Game and Fish logo walk towards me. He was very pleasant, asking if I’d had a good morning paddle which started a conversation about the lake and the fish. Soon Mike and his Dad joined us in the chat until finally, hunger pangs sent us to the sheltered picnic area. I brought my keys, picked up our lunch bag from the truck and headed off, any thought of my iPhone long forgotten!

We ate lunch rapidly because of all the mosquitoes. They were TERRIBLE. At first we planned to go back out but it was so hot and we were tired. The decision was easily reached to call it a day and head for home. I gathered up our stuff and went to get my kayak ready for loading. In no time Mike had it in its rack on top of the truck, Marvin’s boat was loaded, and we were on our way, madly scratching at all the mozzie bites.

And now, the WORST part of the day started to show itself. As we were unloading Marvin’s boat back in Lander, I started digging for my keys. After pulling everything out of the tub where we keep our kayaking equipment….no keys appeared. We put everything back in its place. Then it got worse. I remembered all the pics I had taken with my camera. I had the camera but sometimes I take pics with my phone too, which made me think about my iPhone. Again….tub, purse, and bags were meticulously checked and the truck was searched….glove box, floor, crate…..no phone. We leaped back into the truck and raced the 55 miles back to the lake.

When you are in a boat on this lake, you can clearly see the road leading to the lake from many miles away. As we stopped at the boat launch, a boat was being driven at high speed towards where we were standing on the ramp. It was a fellow fisherman we’d met while we were having lunch. He and his buddies were camped at the lake in their fifth wheel trailers. He’d spotted us coming (hard to miss a bright yellow kayak perched atop a truck). Before we could even say a word, he shouted out across the water separating us that our keys were on the table but that the guy who found them AND the phone, took the phone, saying he would try to find a number to call us and would drop it off in town with the local law enforcement. We asked a few more questions but he seemed to want to go so we thanked him and headed into Riverton, thinking that must be the “town” he was referring to.

Long story short….we went to both the police and sheriff’s offices in Riverton without luck. We called and called my phone. At first, we would hear it ring 3 or 4 times before going to voice messaging but after the 6th call, no more ringing; it went straight to voice message. Whoever had it, had turned it off. We went to Verizon who listed it as “lost or stolen” which would ensure that whoever had the phone would not be able to activate it with ANY carrier. The manager there was also able to see that he had removed the sim card. With that information, Mike immediately recognized ‘the thief‘ had no intention of returning the phone. After searching on Apple’s site, Mike discovered that if we kept the phone as a device on our Apple account, no-one would be able to use that phone ever as it’s registered to us. We made the painful decision to erase all the data on the phone, changed all our passwords and accepted the fact we’d never see the phone again. Such a pity as now, an expensive piece of electronic equipment was worth nothing to anyone; even if it was sold, the unfortunate person buying it might not understand that the phone, although less than 2 years old, is virtually useless.