One of the first scenes in the movie “The Way” takes place in a large, crowded albergue (pilgrims accommodation usually open rooms with rows of bunk beds and very little – mostly none – privacy). Martin Sheen lays awake as the multitudes begin to snore and snore… IT is funny. UNTIL it is you laying there… 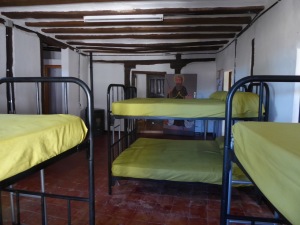 Almost every morning I/we awoke to some fellow pilgrim complaining about the SNORING and not being able to sleep. Just to be clear: EVERY albergue has a ‘snoring problem’ and with rare exception, EVERYONE snores… YES LADIES – even YOU! People snore LONG & LOUD – first, when they are TIRED & second after they have had a few drinks. Combine a large group who have walked a 20+km day, then consumed the cut rate “Perrigrino Menu” which usually INCLUDES lots of WINE… AND the RESULT will be a LOUD & most cacophonous concert that night. Rather than complain, I thought about solutions. After all we were warned.

Every Camino guidebook stresses the need for ear plugs when planning to stay in albergues. From my perspective they are an ESSENTIAL – CRITICALLY IMPORTANT piece of gear. So important that I would even say 2 pairs are advisable – just in case. GOOD EAR PLUGS – NOT some cheap foam ones that the airlines hand out; BUT high quality – GONNA let you sleep through WWIII EAR PLUGS. Before we left the states, Tilly and I purchased 2 pairs each of silicone earplugs  that deadened the snores so much you could hear your own breathing. Only problem, for me – comfort.

I would usually wake up in the middle of the night take out the uncomfortable ear plugs  and lay awake for a while, exposed to the full intensity of the noise. The first night, I braced myself for a sleepless few hours… wondering why I consented to sleep in one of these places. Sure enough there were dozens snoring! But, before I could manifest my frustration, I perceived a rhythm. Some of the snores were synced with others. Patterns began to emerge. Then one section of the room seemed to reply to another section. It was a symphony of nasal obstructions that I was hearing. Instead of being aggravated I became fascinated. Soon I fell easily back asleep.

Most nights in albergues, I seemed to be hearing different concerts. The snores, puffs, squeaks, sighs, humps, whooshes, all blended … I began to name the nights… The Somnambulist Symphony, The 40 Wink Opera, The Snorers Sonata, but the best and most memorable performance was in the public albergue in Leon -The Barnyard Concerto. I awoke to the sound of a cow. ‘Humpf…moooooooooooo’ -‘Humpf…moooooooooooo – then a pig joined in ‘huck…eeeeeee’ …. ‘huck…eeeeeee’ …. ‘huck…eeeeeee’ … chickens clucked… dogs barked… cats meowed …. climaxing with a tractor starting … sputtering ‘puh’ … ‘puh’ …. ‘puh’… the farmer muttered something unintelligible … AND then the cow started the sequence over again. I swear it went on for an hour or more… but who knows… I fell asleep smiling.

But before I make sleeping in albergues sound idyllic, as is wont to happen there was the occasional concert crasher. The Irishman was one. When he snored it was as his neighbor said the next morning, “like a bloody 747 at full throttle pulling an 8 hour long freight train”. I was three beds away and even the super-duty earplugs could not entirely stop the roar. And there were the nights of raucous partying by the locals in the bars located directly beneath our accommodations… one lasting until 0430… On those occasions I thanked the makers of our ‘industrial grade’ ear plugs….

So, if you are planing a Camino walk… pay attention to the warnings of the movie and guidebooks… take some darned good ear plugs. It will help to throw in your imagination and sense of humor.