38 days of continuous walking followed by another 3 weeks of exploring northern Spain….it was time to go home. We left from Charles de Gaulle airport on an early morning flight.

We flew to Atlanta and from Atlanta, back to Denver, arriving in time to catch the shuttle back to Laramie WY. We spent a few nights in Laramie being happily reunited with kids and grandkids…. 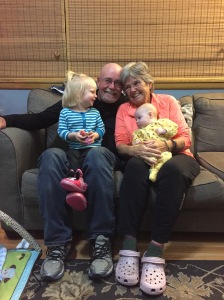 ….joining in the excitement of the Laramie Christmas Parade….

……..getting settled back into our little home on wheels, and seeing the dentist before heading to Lander. We left Laramie and arrived in Lander on a beautifully sunny day and got ourselves all set up. That night there was a big snow storm.

That’s the night we found out that this is not really a 4 season rig – maybe in Florida but not in Wyoming at 22 degrees F. The water pump wouldn’t work properly,the line from the fresh water tank was frozen solid – in a trailer boasting heated tanks, which we discovered were the black & gray tanks ONLY not the freshwater -, air was getting into the system, PLUS there was a hole at the top of the fresh water tank from a misplaced screw….and on and on. 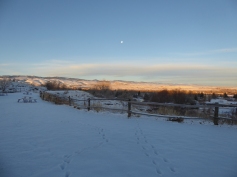 We stayed until we thought South Pass from Lander to Rawlins would be passable – it turned out to be 3 nights. We took an exploratory trip up the pass just to make sure and decided we would be safe enough to drive the next day.

We left mid-morning the next day and got as far as Nephi, (south of Salt Lake City Utah) hoping to finally find warmer temps. No such luck – it was colder that night than any other before it! We basically froze. Early morning breakfast at Dennys and then onwards along I15 to Mesquite where it finally became warm enough to melt all the ice accumulations on the AF. At Mesquite we turned off and when we entered Overton, we decided to stay the night at the Robin’s Nest RV Park. Good rates and friendly people as well as a leaking fresh water tank prompted us to stay for a week while Mike tried to figure out what was wrong. We liked Overton…Sugar’s Restaurant, Lin’s grocery store, The Inside Scoop for ice cream, a great senior’s center, 2 hardware stores, and an excellent library, warmer temperatures – we had everything we needed to be happy.

The week we stayed in Overton, we also went to explore the area. First we went to see Echo Bay, the first campground in the Lake Mead Recreation Area. More about Echo Bay in a separate blog because we ended up becoming the camp hosts there for three months. The next campground was Callville Bay, 30 miles along Northshore Road from Echo bay. At Callville Bay is a fully functioning marina, marina store and cafe, as well as a Ranger Station, campground, and pay showers. From Callville Bay we continued west around the end of Lake Mead to find Las Vegas Bay Campground which boasts a “no generator use” section for campers who hate those noisy conveniences we RVers must sometimes rely on. Now heading back east on the other side of the lake, we discovered Boulder Beach Campground, the largest and most popular of all of the campgrounds in the Lake Mead National Recreation Area or LMNRA. We ended up this particular day of exploration with a visit to Boulder City, vowing to return to check out the Historic Railroad Trail from Boulder City to Hoover Dam, the main avenue for supplies to reach the workers building the dam.