Because we went on an early morning game drive at 530 am, we didn’t follow the usual morning routine. First of all, we were woken up by a thunder and lightning display with heavy rain and then,  a spectacular sunrise! Water water everywhere! What had been dry during the afternoon game drive of the previous afternoon, became a lake.

Our first sighting of the day was a Leopard Tortoise. Richard explained to us that the bushmen in the Kalahari use it for survival in the desert, poor things. We saw many more Sociable Weaver nests. 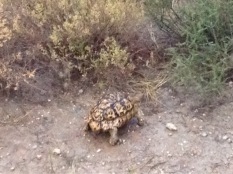 A few springbok close to the truck. The first ones we saw got a lot of photographic attention but as the day passed, because we saw so many of them, we no longer stopped, admiring them on the move instead.

Then … a highlight!! We saw a vehicle pulled over and when we stopped, we saw a lioness, close enough to see red stains on her chest and paws. We watched for a while and then continued on but we hadn’t gone very far when we saw another vehicle. The person driving pointed to a thicket and told us that there was another lioness in the thicket, with a kill. Sure enough. It was right beside the road but so well hidden we could hardly see her. What we did see was tawny fur and the bloody head of a springbok and what we did hear was the loud crunching of bones. We were astounded and stayed watching for quite a while until the feeding lioness joined the first one.

By this time it was around 11 and all we’d eaten was a rusk and coffee so we set off to find a place for brunch – eggs, bacon, beans, salad, fresh pineapple! After brunch we headed back to camp for an afternoon siesta before heading out for our third and last game drive in the Kgalagadi.

The big, culminating event was seeing this black-maned lion. At first, he was stretched out in the shade and we couldn’t see much but then, he got up and moved to another spot. We had a good laugh about the males of this species as we were told that the lionesses do the hunting and raise the kids. The males? They just lie around doing nothing …. well, they do make a lot of noise!!

And this is to protect game viewers from the lions!! We stopped to use the toilets and this is what was there. Just outside and across the road from this ‘enclosed toilet’, Anne found a paw print and sure enough, Dumi told us it was a lion track!! I guess there’s a good reason to have the toilets enclosed!!

We saw lots more small game and birds including a bird I was fascinated by, the Kori Bustard. I don’t know why – we saw lots of them. They were quite shy and would run to get out of the way and once, we saw one take to the air. They looked prehistoric to me.

With all of the driving and looking for game have come many opportunities for quiet contemplation and a deep appreciation of the beauty of nature seen from my window. The different times of day of the game drives presented us with a variety of lighting effects.

On the way back to camp, the setting sun was giving a warm, golden glow to everything it touched. There were a few puddles still on the road; all that was left of the morning’s rain storm.

Dinner was spaghetti bolognaise with fruit cocktail for desert.