To begin with we were a group of 8: Mike and I from Bahrain, Anne from France, Rachel from the USA,  Jan from the Netherlands and our crew – leader, expert driver, historian, geologist and more, Dumi; Richard, expert on birds, wildlife, jokes and good times; and Mandla,  chef extraordinaire – all three from Zimbabwe and all three members of the Ndebele tribe which originated from the Zulus. We were all fascinated with the different clicks in their language and tried with hilarious results to copy them. (In order from L – R in the pic: Dumi, Richard, Mandla.) 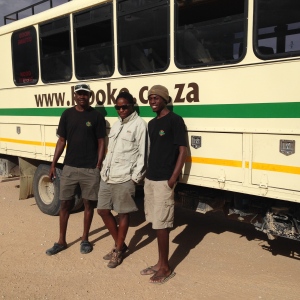 It was the second day of our adventure, a Sunday.We went for breakfast around 7 am. Both of Mike and I were feeling rough … Mike got my cold and, I well … don’t know why … but I was still suffering from the effects of my cold too. After breakfast we all met at the truck, loaded up and went directly to the V&A Waterfront Mall for water, wine, rand, cold meds etc and were on the road by 10. Claire, originally Irish but more recently based in Greece , joined the trip, having come via Mozambique. So now we are 9.

Around noon we made the first of many  “comfort stops” for gas and a pee and were on the lookout for a place to have lunch. Still travelling through the wheat belt called ‘Swartland’ so named because when the wheat is growing and the wind blows, it looks like waves of black. We saw a few vineyards with many more to come, apparently, as we neared the Orange River.

We finally stopped in Cairnwilliam for lunch and by 2 pm we were enroute again. Mike saw 2 baboons from the bus before lunch. Lunch was a greek salad, bread, ham, and fresh pineapple. All fresh and very good.

Later in the afternoon we entered Namaqualand, the domain of the Nama people. This region stretches from Herrera to and across the border into Namibia. The Nama are bushmen.

I felt very content sitting there on the bus, watching the land change, my Michael beside me, the guides chatting and laughing loudly in their Ndebele language. As we neared the mountains, the terrain became more hillier  and all of a sudden we began to see termite mounds. These termite mounds were not as big or as red as the ones I saw in Kenya but certainly had more unusual shapes.

We went up and over a mountain that looked like it had “rock’ icing on it …. a flat – topped mountain with a thin layer of a different kind of rock on top. Stopped at the top of the pass at a viewpoint, the Van Rhynspas, to take pictures and enjoy the view. 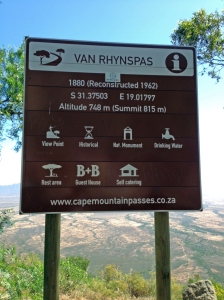 Our first night was pent in Nieuwoudteville. The camp was a bit dilapidated but I enjoyed it immensely. Why? It was our first night camping. I got to see the tents for the first time, how they set them up, and the way our ‘stuff’ was organized on tarps so that all we had to do was collect it, carry it to the tent, and get organized for the evening. 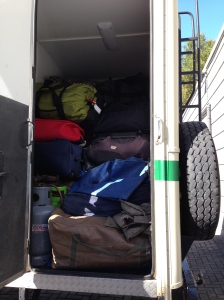 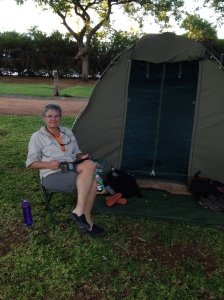 We showered (with little black leeches for company), watched how the crew cooked dinner, sipped wine  and sat and chatted. It was great fun getting to know our traveling companions.  Rachel, the baby of the group, is a computer software developer …. easy and interesting to talk to and always ready for an adventure AND a whiz with clothes pins! Jan a tad bit older works as an archivist and is a true history buff. Initially quiet and shy, he relaxed into chuckles and outright guffaws after a beer. Lover of laughter and dance, he enjoyed and was mightily interested in all things African. Anne works in the car industry. I was so impressed with her linguistic efforts in English. Communicating in a mixture of English, French and hand signals reduced us all to helpless laughter on many occasions throughout the trip. Claire had an interesting story. Originally from Ireland,  she worked for Starbucks, overseeing its Greek, Romanian and … outlets. She quit her job to take a year off to explore both the world outside as well as her own inner world and has been travelling nonstop ever since. She joined us from Mozambique (and Ethiopia, Mongolia, the Congo and and and ). It took her longer to get to Capetown than it did us, coming from Bahrain!!.

When we got to the camp we were met by the resident peacock. He was the funniest, most curious bird I’ve ever seen. I left the door to the toilets open. They must normally keep them closed because this peacock went right up to the door, cocked its head, and looked like it wanted to go in. It did the same thing with the open cargo door of our bus.

Dumi explained yesterday, when we stopped for a while at the top of the pass that we were entering into Namaqualand which is a plateau stretching all the way to Namibia. We were up at a higher altitude so it was cold later in the evening and during the night. Thank heavens for Claire’s extra sleeping bag. She’d brought her own and didn’t need hers and gave it to me for the night.