Today’s expedition was to Louis Lake but when we got there, the wind was up and the temperature was only 45 degrees F (7.2 degrees C for our fellow Canadians). We were at 9,400 feet (2865 meters) altitude. It was FREEZING!!!! Well, almost. For tough Wyomingites, it was fall as usual in the Rockies and, as long as a lake isn’t frozen over, a paddle is in order. We continued to Fiddlers Lake and sat, facing the lake, watching the wind blow, the sun peaking in and out of the clouds, munching peas & carrots, raw nuts, GMO free corn chips and Michael’s homemade salsa. Even if we couldn’t paddle, life was good. But then…..two more stalwart folks showed up with their kayaks, off-loaded and prepared to launch. Oops, no….first they sat to eat their lunch, waiting to see if we were going to call their bluff. We did. We off-loaded, they launched and we shortly after. 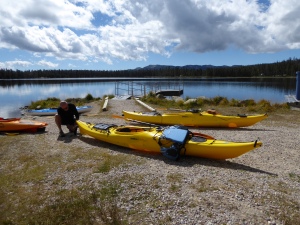 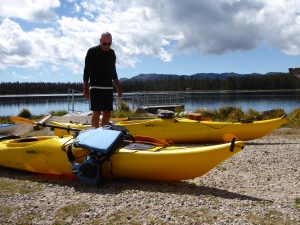 It was a normal day in Wyoming….SPECTACULAR! We set off going counter-clockwise around the lake. Our first visual treat appeared as we glided through masses of lake grasses which threw off the most astonishing abstract patterns with the sun glinting off their surfaces.

The next treat was a beaver lodge which we circled, looking for the entrance. Shortly after, as Mike was taking a few pics, he spotted a muskrat and was lucky enough to capture it in one of his photos. We moseyed our way along the shore in water no deeper than 1 foot. Absolute silence other than the calls of birds and the splashing sounds of ducks as they went about the business of finding delectable treats underwater. 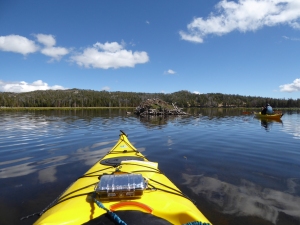 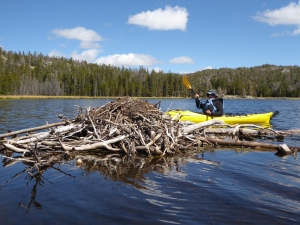 As we were close to completing a full circuit of the lake, we came upon a stand of dead trees. I wouldn’t have stopped except for the tap – tap – tap of a foraging woodpecker. Sure enough there he was, working hard at his drilling job.

We docked ourselves on a couple of water logs, and started taking pics. Of course, that attracted the Clark’s Nutcrackers or Camp Robbers to you Wyoming people, curious as always to see who was invading their space and if perhaps, there might be some easy pickins’ involved.

As we paddled back to the boat launch to use the facilities, we herded some ducks. They’d been following us and, as they learned we were no threat, allowed us to come closer and closer, close enough to get some good pics of their plumage. 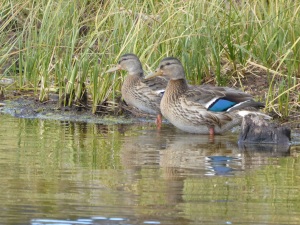 Stopped for a few minutes to stretch our legs and then we were off again, this time, going clockwise around the lake. The wind was gusting so we were able to practice our ‘severe weather’ paddling….NOT. It was gusting and we just sat, allowing the wind to push our kayaks while we watched the scenery. It was like ‘Nature TV’. We saw ground squirrels, chipmunks, ducks, swallows and lots of other birds. At one point, I encountered a ground squirrel who posed for me as I snapped pics. 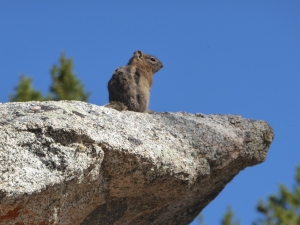 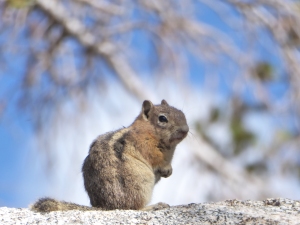 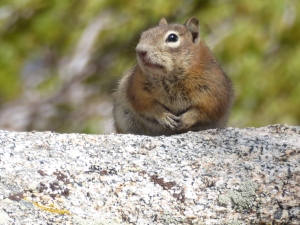 The wind increased and so did our efforts in paddling so that we circled the lake much more quickly the second time round. By the time we returned to the boat launch, it was cooling off and we were battling the wind to get back. The wind, capricious as ever, disappeared as soon as we reached the boat launch so loading the kayaks was easy.

Driving home, we saw the yellow and orange and red of the aspen leaves changing…..telling us that indeed, WINTER IS COMING!!